If you are in Las Vegas and want a landscape that is far more impressive then the manscape called Las Vegas Boulevard, I highly recommend a trip out to the Valley of Fire.

Less then an hour northeast of Vegas, past the quickly depleting Lake Meade, you’ll find Nevada’s oldest state park.  “Valley of Fire derives its name from red sandstone formations, formed from great shifting sand dunes during the age of dinosaurs, 150 million years ago.” Not only have the dinosaurs lived here but the Basket Maker people and the Anasazi Pueblo farmers have also passed through leaving their mark on Atlatl Rock.
The dramatic red rock surrealistscape makes you feel like you are landing on Mars.  No wonder it has been a popular location to shoot many movies, including Total Recall’s Mars.  So with an extra night in Vegas I loaded up the minivan with a group of friends and photographers and we headed out for a sunset/nightshoot.
The plan was to meet dear friend and wedding/fine art photographer David Ziser and his wife Ladawn somewhere in the park.  I’ve toured and worked with the Zisers for several years, but was really looking forward to actually shooting with them!  David just released his first book, Captured by the Light:   The Essential Guide to Creating Extraordinary Wedding Photography, which is quickly climbing the charts of Amazon’s top selling Photo books!
Well, 15 miles before we reached the park we quickly learnt that there is no cell phone reception in Mars.  Luckily the park if fairly small with the main Valley of Fire road connecting the East and West entrances of the park.  And surprisingly within 20 minutes we ran into each other chasing after the last licks of magic hour light.  Click on the wonderful group shot taken by Matt Hill to see who all the players are.
In order to photograph in the Valley of Fire at night you need to have a camp site.  So with the twilight hour now behind us, we headed out to the Arch Rock Campground that we had scouted earlier.  Zoobroker got right to work seasoning up the meat and firing up the grill.  Matt, Sylvester, and I set up our tripods and started popping red gel’d flashes as we went from chasing the light to chasing the stars.
Sebastian in the sky was a 6 minute exposure and then I pulled back to get more of a feeling of the whole campsite.  It was packed, we were lucky enough to get one of the last spots that was right in the front of the entrance.
We definitely felt that we were in the Valley of the Gods.
Thanks to Zoo that was the best camp meal I’ve ever had, pork loin and home-made cheese stakes!
Sorry, no pictures, it was quickly devoured by all of us in record time!
Most of the images you see here were shot at a lower ISO, but the “Elephant Eye” photo at the bottom was shot at 6400 ISO to capture what the night sky actually looked like.  Obviously we were far away from any city lights and the sliver of a moon had not risen yet which meant plenty of stars in the sky.  By keeping your exposures under 30 seconds you’ll get more of the celestial feel of the night which can be just as beautiful as those long star trails.
Sylvester, who I quickly learnt is prone to dancing with fire, was the next subject of our shoot.  The difference between the two photographs is what happens when you twirl light in a continuous pattern as opposed to a chaotic pattern.
Which one do you like more?
Remember any light that is in the frame of your photograph, whether coming from a flash, flashlight, or flame will be permanently exposed in your image.  Sylvester spun the light for approximately 30 seconds and then I popped a red gel’d SB900 on the rocks about 5-8 times at full power to enhance the red rock.  I needed to walk into the image during the exposure in order to get close enough for the flash to “read red” on the rock.
Why is it that you don’t see me in the image?  I was blocking the light, not getting hit by it directly, and I was never in the same place for more than a few seconds during these 8 minute exposures.
I did slip up once in the image Inside the Beehive #2, but luckily it perfectly matches up with some of Sylvester’s sparks.
In the last shot of the night I wanted to go long and get a more atmospheric shot of the Beehive.  I set up for a 15 minute exposure and popped the red gel’d flash at 1/2 power 4 times about 8 feet away and at an angle to add depth to the rock.  This ended up being my favorite shot of the night, though I really liked all the ones you see selected here.
Matt Hill also got some killer shots that you can see in his 3-part blog titled Valley of Fire.

Next up…Night exposures at the Drive-In Theater 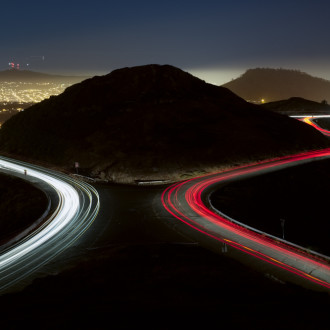 I originally wrote the below 10 tips on Creativity for a B&H feature on Inspiration for the New Year. I…
On a recent trip to San Francisco, I got together with a bunch of Nocturnal guys and celebrated the Full…