Tis the season to reflect back upon the year – your accomplishments, adventures, failures, and of course, pick yourself up and get ready to steamroll into another year.

Last year I took 29,521 pictures. I have yet to do a “hard” edit on several shoots and could probably delete a bunch more. A few thousand also fit in the timelapse category – which I am still searching for the best software to create these little flipbooks.   However you compare that to the 49, 217 in 2013 and 35,964 in 2012 and you can say I either wasn’t as prolific or I was more focused. How many photos did you take this year? Are you still working on them or are you ready to move onto the new 2015 folder?

One of my regrets for 2014 was that I didn’t blog and share my work as well as I could have. The book seemed to have drained me of any new words and I was busy now celebrating it and taking it on the road to various lectures, workshops, and travels. That was definitely a ton of fun and I enjoyed receiving lots of emails and feedback from all the people that I had shared my night visions with in 2014. I love teaching workshops; the moment when a student gets that “A-ha” is just as thrilling to me as it is for them. I was fortunate enough to have the workshop scene take me to some pretty fabulous places from Baja-Vegas-Zion-Bannerman-Missoula-Maine-Woodstock and Woodlawn. But it was just as important to plan some personal shoots where I could act the role of the student and explore new locations and challenge time and composition.

2015 looks to be another banner year with trips to Finland, Iceland, and Galapagos in the works. But without further ado – here are my 13 favorite images that I created in 2014. January 1st 2014 was probably one of the most soulful days that I have ever experienced. I was in the spiritual capital of India, Varanasi, with my Dad, my Indian sister Sujata, and a couple other friends. We had been given an amazing opportunity to visit several ashrams – safe spiritual houses for widows. In the caste system of India, widows are the lowest of the low and will often not be taken in by family and are left to die.

The Sulabh International Social Service has taken a very proactive roll in housing and protecting these widows in Varanasi and Vrindavan. The image above was taken at the first ashram we visited. I had taken my Fujifilm Instax camera on this trip and it has never been put to such good use, as it was that day. As their stories were translated to us, I took instant portraits of them and let the magic of photography take over. You have to understand that many of these women are photographed but very few prints are sent to them. As soon as I took the Instax of the woman on the right, she grabbed my arm and took me to her mother’s room and woke her – so they could get their picture taken together. They are one of the few mother and daughters who have both lost their husbands but were lucky enough to find a safe place together. A week after I returned from India, I was off to Sea of Cortez and Baja Mexico with Lindblad on one of their Land and Sea Photo Expeditions. I had taken a shot similar to this the year before but I wasn’t 100% thrilled with it. This image is 11 stacked 8-minute photographs. I love how the star trails create a complimentary half circle to the breakwater.   I recently went back to this shot and converted it to black and white, which took it from a 3 to a 5 star in my book. Boy, it snowed a lot last year!   But I loved it – the challenge of taking on the elements and how they make us see the world in a different light. This is my subway entrance, a place I pass by 400+ times a year and I’ve never seen it look as magical as it did this night. I learned a long time ago to always have a camera on you. I stood at the entrance and fired off a burst of photos varying the shutter speeds from 1/4s to 1/15s to find just the right type of confetti snow. Probably my favorite night image from 2014. This was a shot that had been percolating in my mind for a long time – the Night Island. I braced myself at the top of one of the twin peaks as the winds tried its best to knock my rig over. This is a single shot, twenty minutes, and pretty much exactly as I pre-visualized. It was great to check this image off my to do list and to create instead of capture.

Another location that was on my to shoot list was the Breakwater Lighthouse in Maine. I had visited this dramatic spot several times over the years and filed it away as a cool place to photograph at night. As luck would have it, the fog was in and I was able abstract the lighthouse to its essence – a beacon of light.

This year I was fortunate enough to work with the Maine Media Workshops and give a lecture on night photography as well as lead a bunch of students on their first night shoot. I was up there for a week and shot almost every night, which is a great challenge to put on your self. You get attuned to the different types of night-light and can feel the earth rotating around the stars. I was lucky enough to be up there for a new moon and witness the Milky Way just outside Camden. I set up this composition and as the few spotty clouds rolled in I knew it would make a great timelapse. It was also featured in Resource Magazine’s interactive digital version of their Fall 2014 issue This was created on a scouting mission for an upcoming Devil’s Tower workshop that I will be teaching with Matt Hill through the Rocky Mountain School of Photography. Devil’s Tower is one of the best places to view the Milky Way and I only had one night that I could shoot it. The weather forecast was not good – overcast, but I continued my 10 hour drive through torrential storms, dramatic skies, and a rainbow or three. When I finally got to the tower – it seemed as if there was an invisible beam shooting upwards – pushing the clouds away from the top of the tower. I took advantage of this magical time and was rewarded with a few peaks of the milky stars in between some quickly moving clouds. It only lasted an hour or so before the blanket of clouds returned – it is said that this is a very spiritual place and it certainly answered my prayers.

I created this lightpainting/star trail combo as an example of what we can do with time during my night photography workshop at The Center for Photography at Woodstock this summer. I’m always looking for dramatic foreground to play against the star trails and this sculptured cabin was prime for the picking! I practiced the light painting at several angles and in the end it was the bounce light of a 80-lumen flashlight off the ground that produced the best light and shadows. The exposure was 18 stacked 4-minute exposures that created the 1 hour and 12 minute star trail. I was taxed with the mission of pushing the Sony RX100III to the low light limits for a video that B&H made about the RX series of cameras with David Brommer and Alan Arkin. I own the V1 of this camera, that is often hailed as the best advanced point and shoot camera on the market. I’ve also always pooh-pooh’d P&S cameras for serious night photography. So I packed this camera and went out to push those pixels along on a trip to Salt Lake City. I was able to successfully get exposures up to 30 seconds with minimal loss of image quality. This was my favorite shot of the night – a 4 second shot making the most of the blue hour. Here’s another story of overcoming the elements. When traveling to Portland, Oregon you gotta take some time to visit the coast. We only had 1 day to do it and the forecast was torrential rain the entire time. We could have easily just stayed in one of the many microbreweries in Portland – but we got our rain gear together and carried on! This was just one of those spontaneous shots that comes together. We were searching for a beach with a skeletal shipwreck but when we pulled into this parking lot and I saw the arrow I slammed on the breaks. We all got out and saw the composition – but Paige took it to the next level and ran out there and jumped!

I want to create not capture. I want to challenge the way I see and I want you to see my vision of this space. Deconstruct and let your mind wander. Tom and I were shooting this hidden gem of a spot in Pittsburgh but it was missing something. I had been working the lightpainting on the outside and we knew we needed to add an element to the black hole of an entrance. I asked Tom to go inside and fire up a flash a few times to open it up. As Tom approached the entrance, and before the bat flew out, I knew that was the shot. By adding the human element, the mysterious explorer, I found just what the shot needed. When creating, photography can be an amazing art form to explore your emotions. I gravitate to cameras or lenses that can help you see in a new way. I recently picked up this super simple and fun Theta camera, which captures the world in a 360-degree view. That’s a pretty outstanding starting point for vision and I have just begun to manipulate it and create these new worlds.

[caption id="attachment_208" align="alignleft" width="218" caption="Rebirth"][/caption] Today marks the 96th year of my grandmother, Fannie Biderman. I was sad to note…
The word routine was born in 1676 according to Merriam-Webster. We can thank the etymology of this word to the… 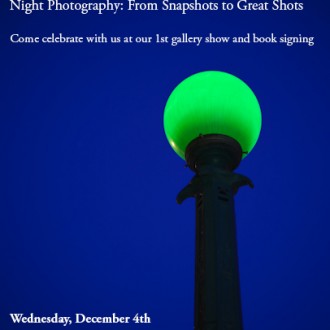 If you are in NYC on December 4th and 5th,  we'd love to see you at either one or…