“You who wander around the world, eager to see imposing and amazing marvels, come here…”

I apologize for the delay in blogging, but with my computer’s hard drive crashing and the Red Sox winning the World Series my life has been a little topsy-turvy lately!

Click on any of the pictures above to make it bigger and let’s continue our journey through a guided tour of the Monster Gardens.

David, Nancy, and I had hoped to shoot the Monster Gardens with an 8×10 cameras and 4×5 Pinholes. Unfortunately, no amount of Euros were able to get our tripods passed the entrance. We quickly adapted, David ironically went from his signature 8×10 to one of the smallest camera formats, the half frame. He also had a Nikon EM camera with only a Lensbaby 3G attached to it. Security, or “Senor Scowl” as we called him, was never more than 20 feet away from us just to make sure our tripods never came out.
As we walked through the portal to the Monster Gardens we were immediately greeted by two sphinxes, each sitting on platforms with a well worn out welcome:

“You, who enters here, be very attentive and tell me if theses marvels have been realized due to a mistake or if it is a form of art”

Was that supposed to be a riddle? Were we going to be thrown off the cliff as in the story of Oedipus?
We passed by unscathed and looked below us to a lower level were a stream ran and a huge colossal sculpture of Hercules tearing apart Cacus stood. Dubbed the “Struggle between Giants”, and shot with David’s lensbaby, Cacus’ mouth is wide open in grotesque pain, a silent scream that echoed throughout the gardens. Turning away, we saw ancient moss covering a gigantic turtle bearing the winged victory, Nike, on it’s shell. This could only be seen in the distance since the area was under renovation, unapproachable, and unfortunately unable to be photographed without a telephoto lens. You can, however, find a drawing of it by Bartholomeus Breenberg in the Louvre, where it’s regarded as one of its masterpieces.
There was definitely more people there than when Nancy and I visited in 1997, but it was still easy to take our time and get lost in the gardens. We approached the beautiful fountain of the 3 Graces where David took this amazing half frame panoramic of a very Etruscan looking Venus. We continued on, passing by a small theater and several ancient fountain bathtubs, walking directly to the Leaning House basking in the sunlight breaking through the sacred forest. This ancient fun house was probably one of the first of its kind to be purposely built at a 30 degree angle. Its foundation and floors rose up and literally pushed us out the door. I guess the Prince didn’t want anyone overstaying their visit! We now stood at the main courtyard. Rows of 4 foot tall giant vases rose from each side and led us toward an ancient fountain featuring the king of the sea, Neptune. Behind the Giant vases lurks one of Rome’s fiercest enemies, Hannibal, atop his famous war elephant crushing a Roman legionary. Next we see David’s lensbaby Dragon. The dragon, who represents time, is being attacked by a dog, lion, and wolf; symbols of spring, summer, and winter. Turning away from the courtyard I came across the most beautiful sculpture in the gardens, Ceres, the nurse of Rome. Ceres is of the older sect, the precurser to Diana, and was goddess of agriculture, grain, and the love a mother bears for her child. Experts consider this sculpture one of the most beautiful in the world for its perfect proportions…especially in a garden so out of proportion. Leaving her gaze I turned around to see the steps that lead up the Ogre’s mouth. We stopped and did a photoshoot there for a while. I sat inside the monster’s mouth with about 7 other people, the sacrificial tounge table sat empty between us. I felt that place could truly be a gateway to the Underworld.
The dreamworld continued as Nancy laid down on the Etruscan bench whose Latin scripture read:

“You, who wanders the world,
Anxious to see huge and magnificent marvels ,
Come here where you will find hideous faces
Of elephants, lions, bears, ogres, and dragons”

We walked past the goddess of the garden and of the hearth, Proserpine, and took the lensbaby stairway past Cerberus, the 3 headed dog, who guards the gates of hell.
“Senor Scowl” watched us as we watched the Lions and furies battle it out. On the highest level of this ancient mound lies the Temple that was not part of the original Villa of Wonders. It was built 20 years later in 1572 and dedicated to Prince Orsini’s recently deceased second wife, Giulia Farnese.
We had been wondering around these wonders for over 2 1/2 hours when we finally found ourselves in front of the sphinxes again. This time we went to the left and passed by short columns along the side of the road. On each column lay a sculpted head of a god of Antiquity: Saturn, Janus, Evander, the Faun, and the Triple Hecate. We were along the stream again and the final sculpture loomed in the distance. Slightly smaller than Giant Ogre and off limits to the tourist, the colossal head of Proteus-Glauco bore a huge decorative globe which in turn held the castle of Orsini. This symbolized the power the Orsini family wielded in this world. The name Proteus-Glaucos is interesting because it represents two different gods from Greek and Roman mythology. Proteus was an early sea god, originally called “Old Man of the Sea” by Homer, and was also the son of Poseidon. Glaucus, according to the Roman Ovid began life as a mortal fisherman before eating an herb that turned him immortal but also changed his arms and legs into fins and tails and forced him to live his life in the sea. Both gods, if captured could foretell the future.

Well, this ends the tour of the Monster Gardens. It was Nancy and my second trip to the forest of Marvels and we could definitely find ourselves there again. Next time, however, we’re contacting them prior to make sure those tripods come in…Monsters at night anyone?

*Most of this info was found in the barely English Monster Gardens Guidebook, 5 euros, and countless hours on the world wide web.

I recently returned from a road trip with a very special twist. It started with an opportunity to attend The… 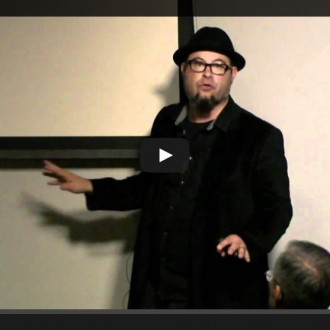 httpvh://youtu.be/5_Q5PrOnyXs For those of you who have never had a chance to see my Night Visions talk at B&H's Event…
Coney is definitely on my mind as this dramatic shot of the Parachute Jump makes the Photo of the Week.…